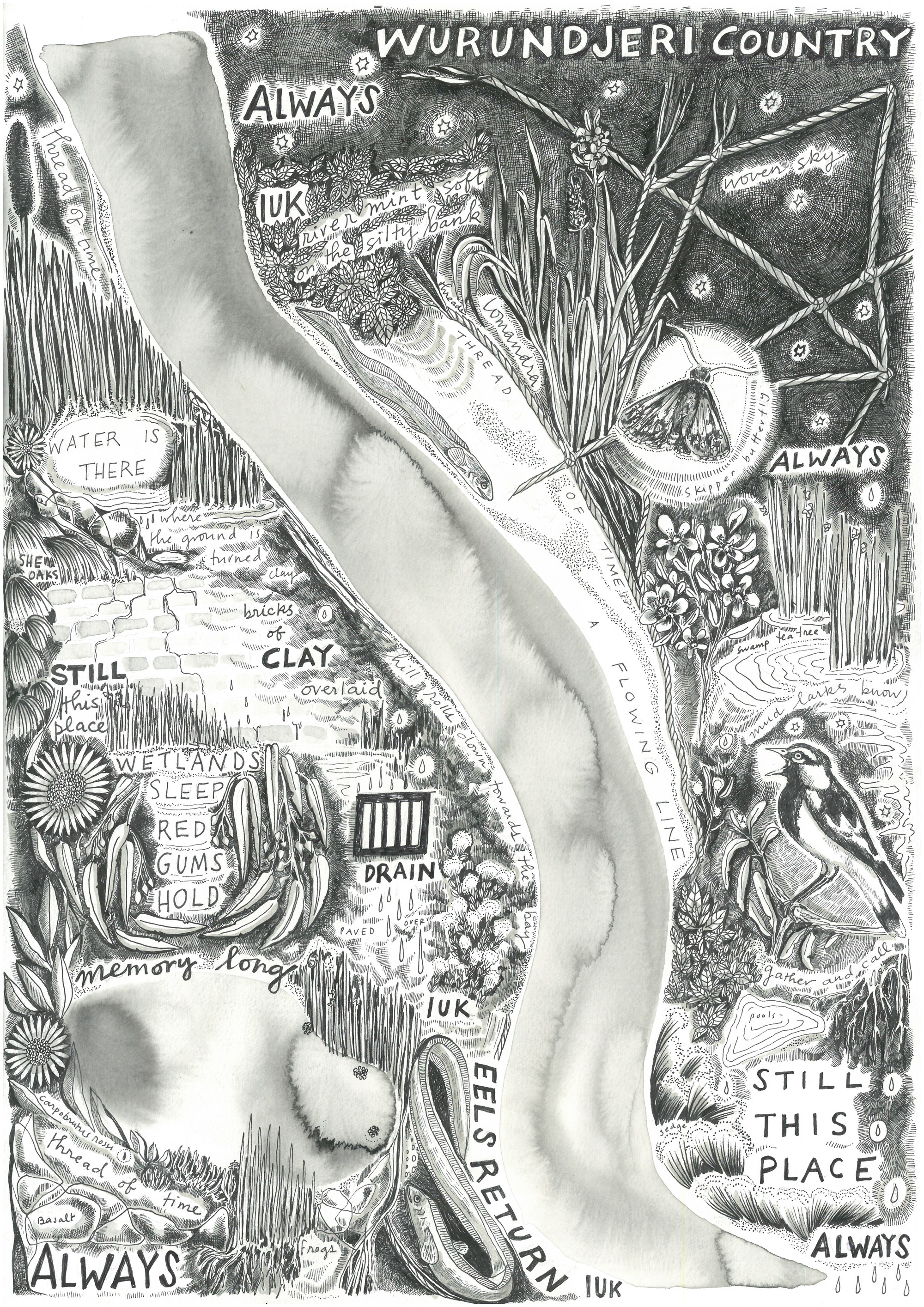 Reeds / Rush and accompanying song map drawing have been created in response to our time as Artists in Residence at The Living Pavilion from 1 - 17 May 2019, University of Melbourne, Parkville. We acknowledge the unceded sovereignty of Wurundjeri people of the Woi Wurrung language group of the Kulin Nation, on whose land the University of Melbourne has been built. Wurundjeri people have cared for lands and waters in this place for thousands of generations. We pay our respects to Wurundjeri Elders past, present and emerging. We pay our respects to Mandy Nicholson and Djirri Djirri Wurundjeri Women's Dance Group Djirri Djirri Wurundjeri Women's Dance Group.

Reeds / Rush makes reference to Zena Cumpston’s detailed research which accompanied the 40,000 Kulin Nation plants installed at The Living Pavilion, and to the hidden waterway, known today as Bouverie Street Creek, that traverses the University site. We learned that the creek is fed by a wetland situated under the University oval, where four River Red Gums, which pre-date the University, still stand. The creek was put into a drain following disruption and colonisation, but water still follows this path, as it always has, flowing into the Elizabeth Street waterway which meets the Birrarung, and continues out into Narrm / Nerm / Port Phillip Bay. Iuk (eels) still migrate through this waterway, and have been seen beneath drain covers and in pools across the campus.

We participated in workshops and listened to panel discussions, attended readings with Eco Feminist Fridays, observed bees and learned to identify the endemic Skipper Butterfly during an art-science biodiversity workshop with RMIT & University of Melbourne researchers Luis Mata and Christina Renowden CAUL Hub. We also learned about frogs endemic to the area from Associate Professor Kirsten Parris and listened to recordings of their calls. Mud larks regularly visited while we sat at The Living Pavilion, singing from the trees overhead.

These learnings and experiences are referenced in the song and accompanying song map.

We acknowledge the work and research of Zena Cumpston, Cathy Oke and Tanja Beer, and all who shared knowledge and contributed to The Living Pavilion.